Tuberculosis (TB) is an infectious disease usually caused by the bacterium Mycobacterium tuberculosis (MTB). Tuberculosis generally affects the lungs, but can also affect other parts of the body. Most infections do not have symptoms, known as latent tuberculosis. About 10% of latent infections progress to active disease which, if left untreated, kills about half of those infected. The classic symptoms of active TB are a chroniccough with blood containing sputum, fever, night sweats, and weight loss. The historical term "consumption" came about due to the weight loss. Infection of other organs can cause a wide range of symptoms.

Tuberculosis is spread through the air when people who have active TB in their lungs cough, spit, speak, or sneeze.  People with latent TB do not spread the disease. Active infection occurs more often in people with HIV/AIDS and in those who smoke. Diagnosis of active TB is based onchest X-rays, as well as microscopic examination and culture of body fluids. Diagnosis of latent TB relies on the tuberculin skin test (TST) or blood tests.

Prevention of TB involves screening those at high risk, early detection and treatment of cases, and vaccination with the bacillus Calmette-Guérinvaccine. Those at high risk include household, workplace, and social contacts of people with active TB.[8] Treatment requires the use of multiple antibiotics over a long period of time. Antibiotic resistance is a growing problem with increasing rates of multiple drug-resistant tuberculosis (MDR-TB).

One-third of the world's population is thought to be infected with TB. New infections occur in about 1% of the population each year. In 2014, there were 9.6 million cases of active TB which resulted in 1.5 million deaths. More than 95% of deaths occurred in developing countries. The number of new cases each year has decreased since 2000.[1] About 80% of people in many Asian and African countries test positive while 5–10% of people in the United States population tests positive by the tuberculin test. Tuberculosis has been present in humans since ancient times. 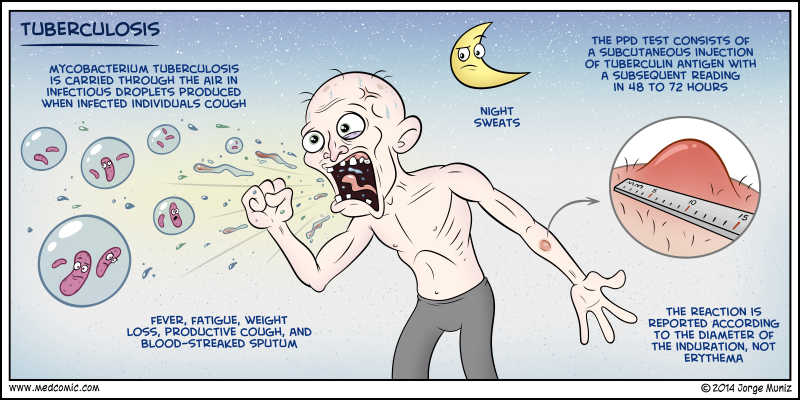 Diagnosing active tuberculosis based only on signs and symptoms is difficult, as is diagnosing the disease in those who are immunosuppressed. A diagnosis of TB should, however, be considered in those with signs of lung disease or constitutional symptoms lasting longer than two weeks. Achest X-ray and multiple sputum cultures for acid-fast bacilli are typically part of the initial evaluation. Interferon-γ release assays and tuberculin skin tests are of little use in the developing world. IGRA have similar limitations in those with HIV.

A definitive diagnosis of TB is made by identifying M. tuberculosis in a clinical sample (e.g., sputum, pus, or a tissue biopsy). However, the difficult culture process for this slow-growing organism can take two to six weeks for blood or sputum culture.Thus, treatment is often begun before cultures are confirmed.

Nucleic acid amplification tests and adenosine deaminase testing may allow rapid diagnosis of TB. These tests, however, are not routinely recommended, as they rarely alter how a person is treated. Blood tests to detect antibodies are not specific or sensitive, so they are not recommended.